A mission to Mars means astronauts will have to diagnose problems without input from Mission Control (due to communication delays).

We conducted qualitative and quantitative research on 5 astronauts and multiple experts in Johnson Space Center and looked into analogous domains.

We tested multiple interactive prototypes with astronauts and experts to arrive at the final solution.

A diagnostic tool that enables astronauts to troubleshoot anomalies in deep space.

Astronauts rely heavily on Mission Control (a 100+ personnel ground team) on earth to solve anomalies.
However, a mission to Mars means long communication delays and blackouts, which means astronauts will have to work more autonomously from Mission Control while diagnosing problems.
How do we get the expertise of 100+ experts on earth to 4 astronauts in space?

To understand how astronauts currently diagnose problems and the future of troubleshooting, we wanted to get a holistic picture of the problem space. We used 4 research methods:

We were incredibly lucky to go to the Johnson Space Center in Houston, the home of Mission Control! We sat in on a flight controller training session for some contextual inquiry, saw Mission Control, went inside a full scale Mockup of the International Space Station (ISS) and talked to subject matter experts (Flight Controllers, Astronaut Trainers, Flight Directors, MER Managers and CAPCOMs)

We interviewed and user tested our prototypes with 5 astronauts!!
We wanted to see how experts diagnose anomalies in other problem spaces, so we turned to Analogous domains by interviewing and surveying HVAC technicians, miners, electricians, auto mechanics, pilots and computer engineers.

Through our research, a lot of astronaut needs started to emerge. We tested these needs by creating storyboards and presenting them to astronauts! Here are some examples of our storyboards:

How might we keep the crew going when things get tough? Need Validated

How might we condense information into a single screen? Need Validated

How might we make safety and engineering data more available for just-in-time training? Need Validated

How might we manage conversations with long delays? Need not validated

How might we help people practice troubleshooting best practices even when they get frustrated and suffer from the “space stupids?” Need Validated

How might we update the concept of procedures for unanticipated anomalies? Need Validated

How might we make authority clear? Need not validated

How might we help astronauts characterize risk? Need not validated

This process worked really well, because astronauts were very honest. They told us when a need was valid, and when something wasn’t our strongest idea.

More details on my research
INSIGHTS

We arrived at insights by organizing information from interviews and contextual inquiries in multiple affinity maps. Based on our insights we created a model to enable successful troubleshooting in the context of future space missions. 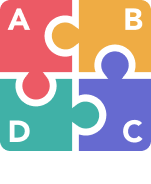 “Crew members only look at instantaneous data, so their situational awareness is much less.”
-Astronaut trainer

“Even the most experienced engineers break the rules sometimes.”
- Electrical Engineer

Critical thinking
Astronauts need to think like flight controllers, ask the right questions at the right time and think through downstream implications.

“Crew is trained to adhere to procedures, you don't want to operate outside of that."
-Astronaut on Soyuz-10

Documentation
Mission control won’t be replaced in the near future. Documentation is necessary to allow MCC to assist.

“In high stress situations, the crew has more situational awareness, and the ground does not provide good judgement.”
- Flight Controller

Based on our insights and a reframing exercise, we crafted a narrowed problem statement:

How might we situate diagnostic tools in a workflow to support astronauts in thinking clearly, rationally, and critically?

To answer our how might statement, we ran 3 user testing sessions with prototypes of increasing fidelity.
We tested our prototypes with 3 astronauts and 7 subject matter experts. In each session, we walked the participant through the prototype, highlighting its various interactions and capabilities.

Automation
Any technology that can automate routine planning items and take the burden off the astronauts is welcome.

Privacy
Astronauts are hesitant to send down half-baked thoughts to mission control and wanted the ability to correct an uninformed message. 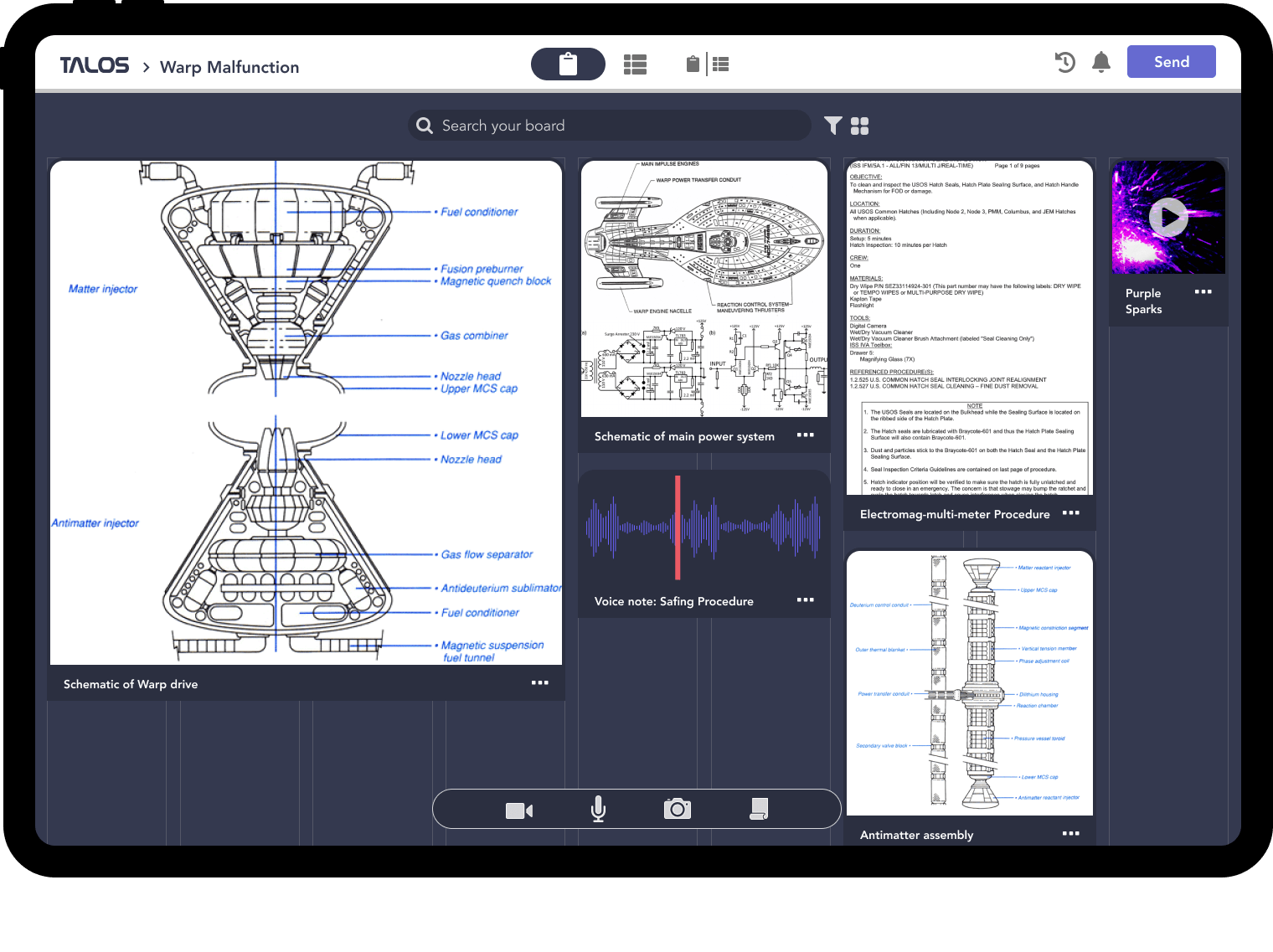 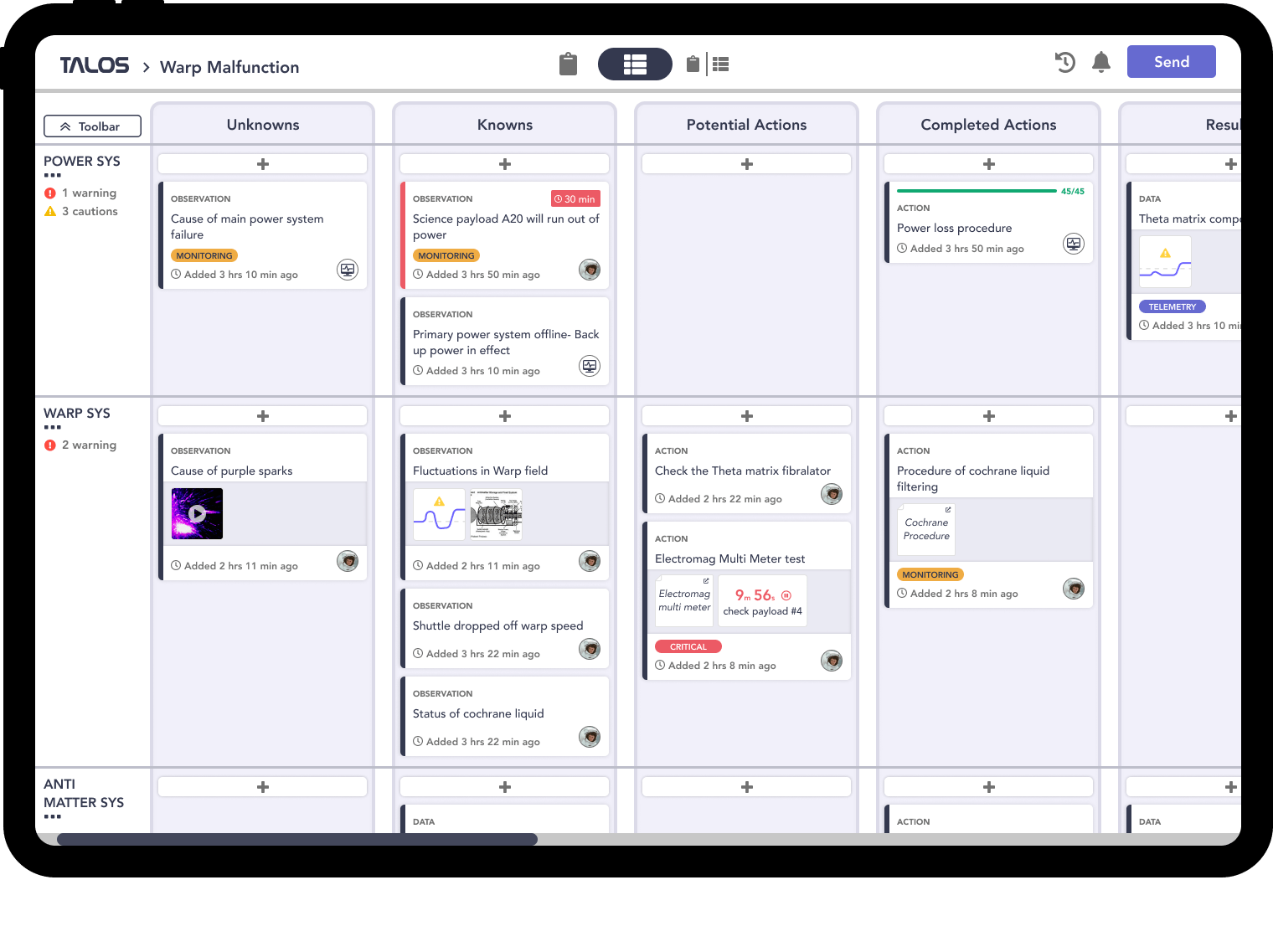 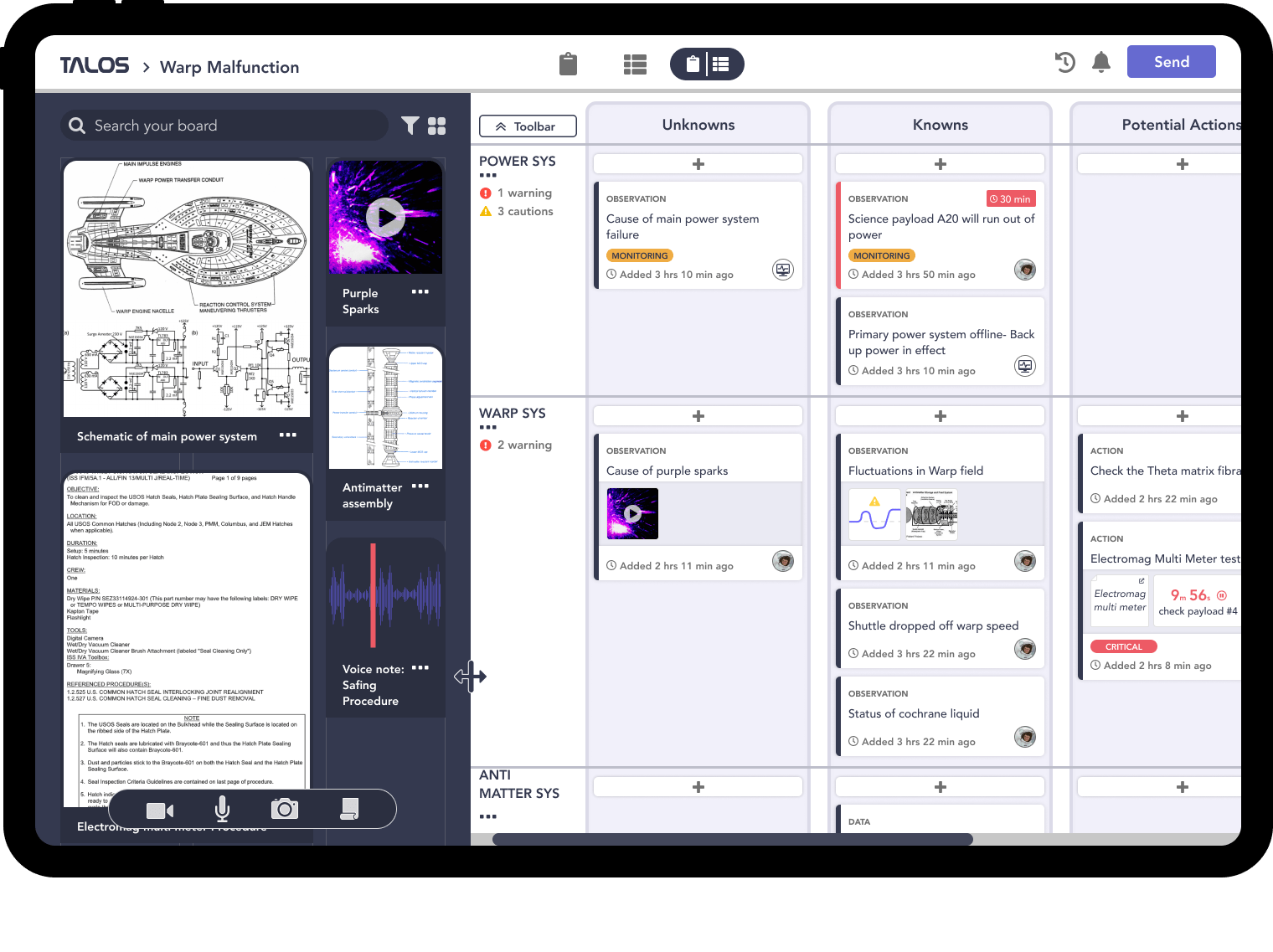 Split View
Simultaneously view the gather and plan views. Resources from the gather view can be dragged directly into cards, giving them additional context. 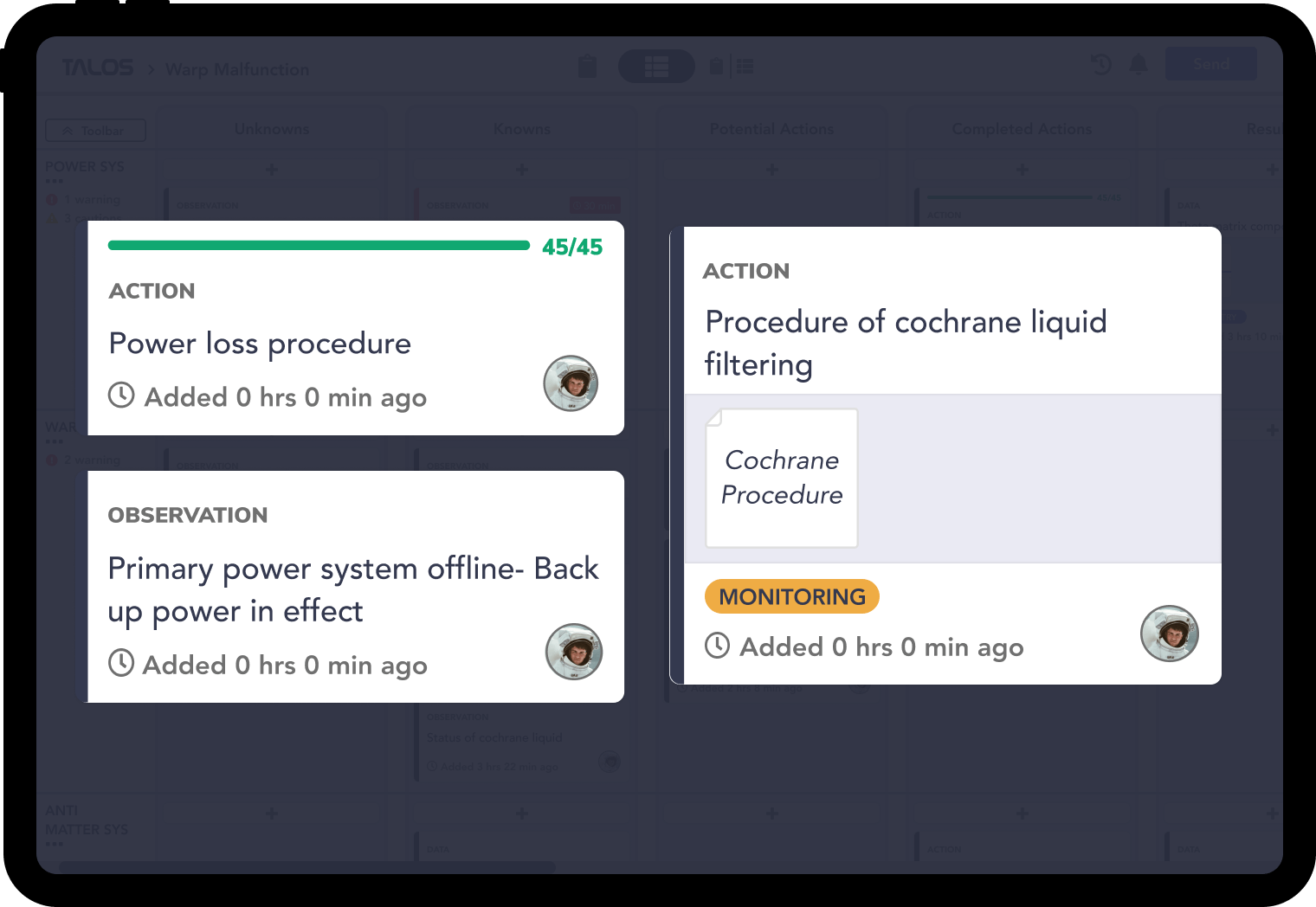 The front of the cards contain the card type, card title, time the card was created, and ID of the crew member who created the card.

“This is really what these cards do, they give you a bit of a mental model, both in functional space and time.”
- Astronaut on STS-85

Records more in-depth information about the observation or action. Astronauts are prompted to consider downstream implications of the card and potential times to effect.

“I think what you've done is created a space that's much more multi-sensory, that makes the picture that's being painted much more intuitive and complete than typing it out on a form.”
- NEEMO Lead 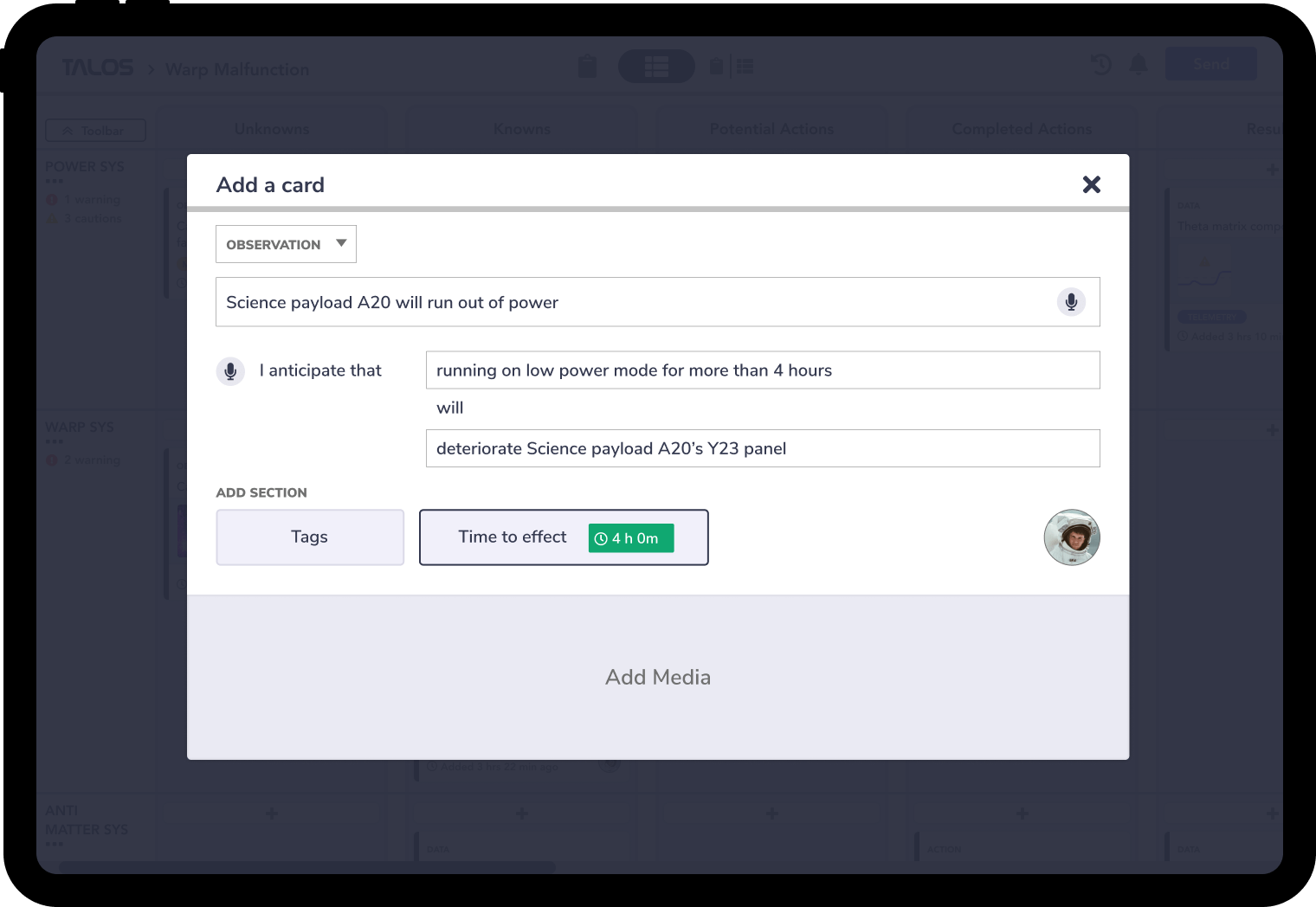 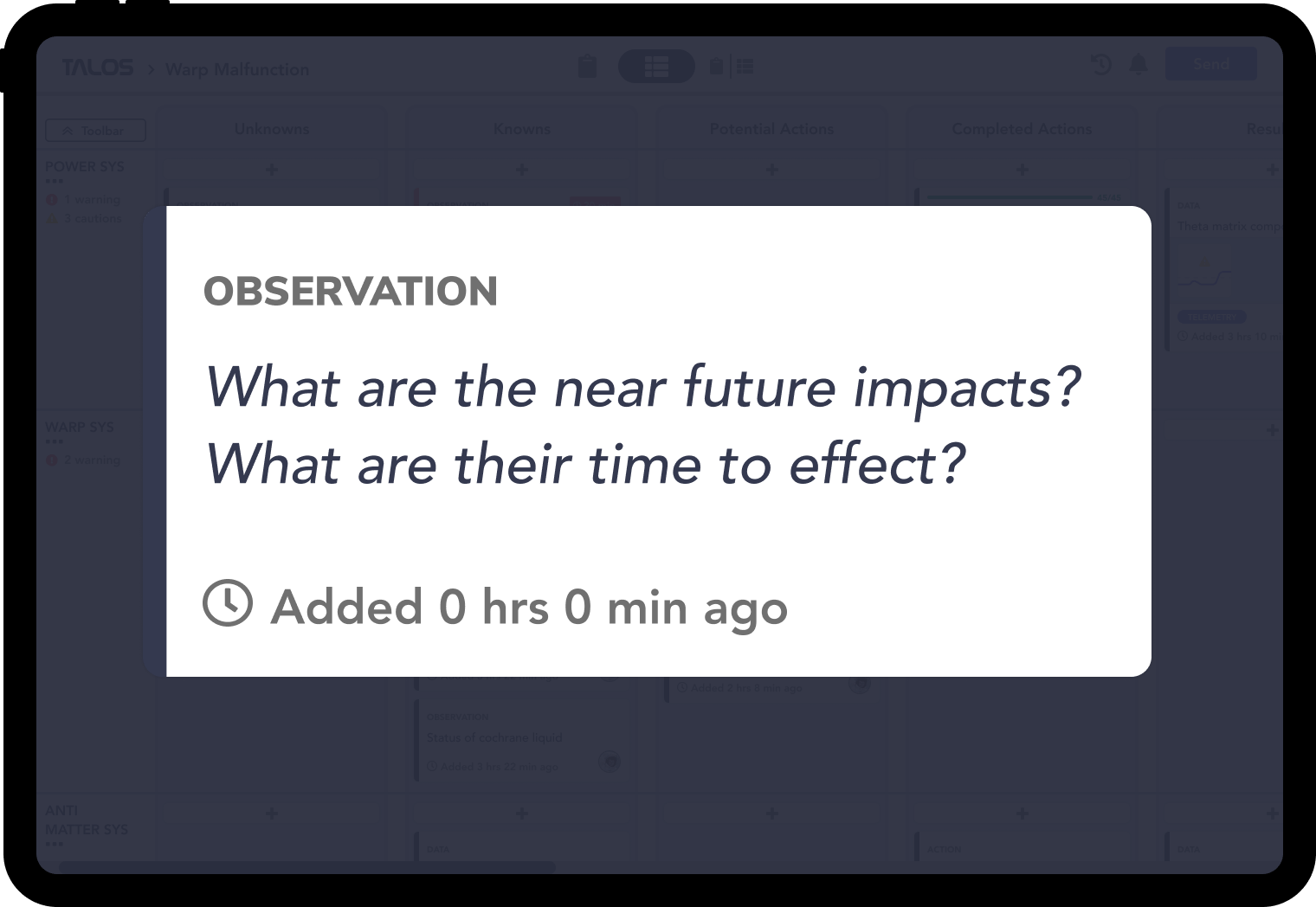 TALOS pre-populates the unknown column of each swimlane with a card prompting crew members to consider time to effect (the time until a particular effect is expected to manifest) and near-future impacts. 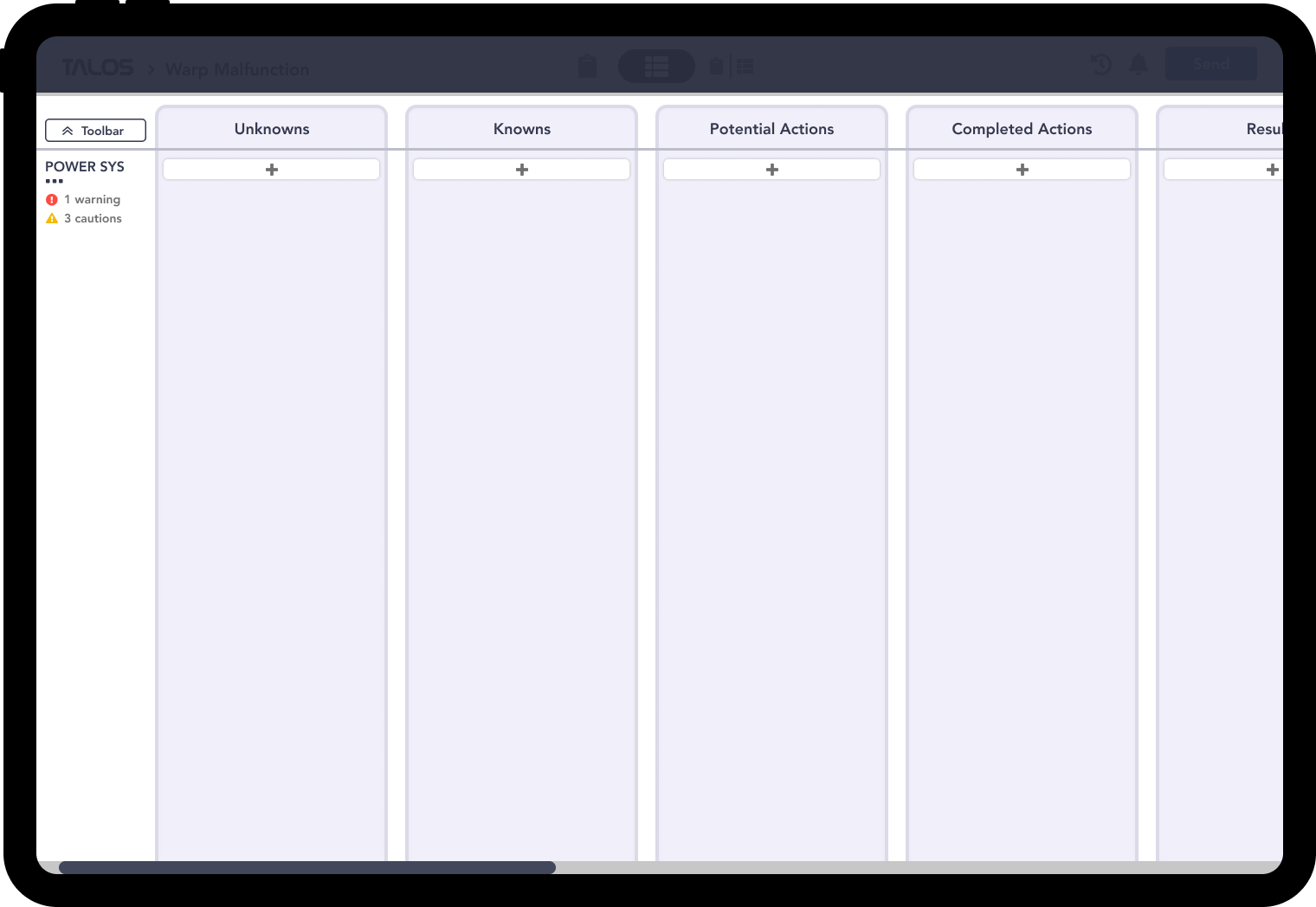 The planning board has 5 pre-populated columns: unknowns, knowns, potential actions, completed actions, and results. Keeping track of every action and its result, allows crew to test one thing at a time.

“The ability to communicate what is known and unknown, and how to make the unknown known, is critical.”
- Flight Controller 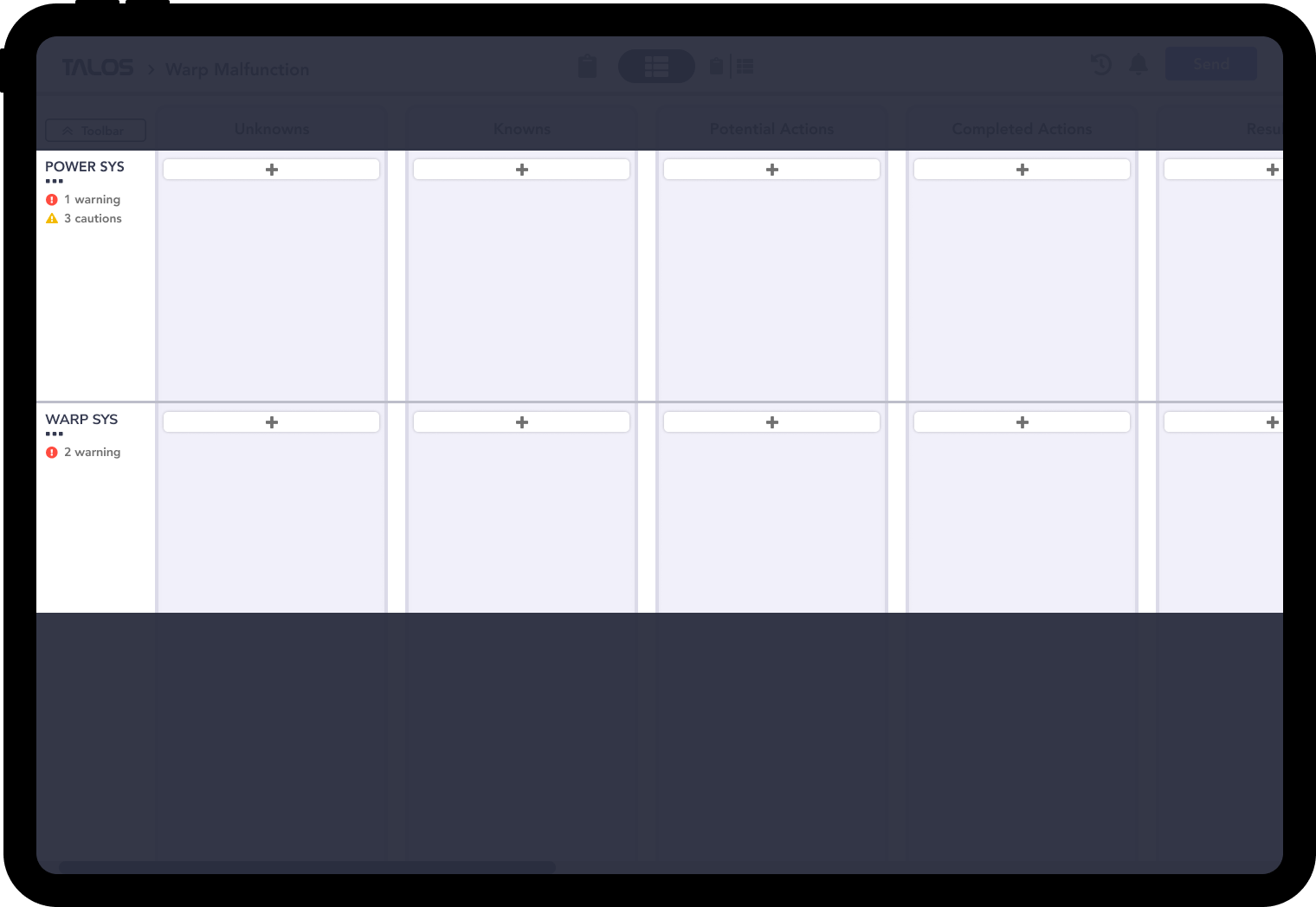 Swimlanes function similarly to branches on a fault tree. Astronauts are encouraged to follow a path and lop it off if it is unrelated, this makes the path more clear.

“Basically, you’re helping me do a storyboard, lopping off branches on the fault tree.”
- Astronaut on Expedition 22 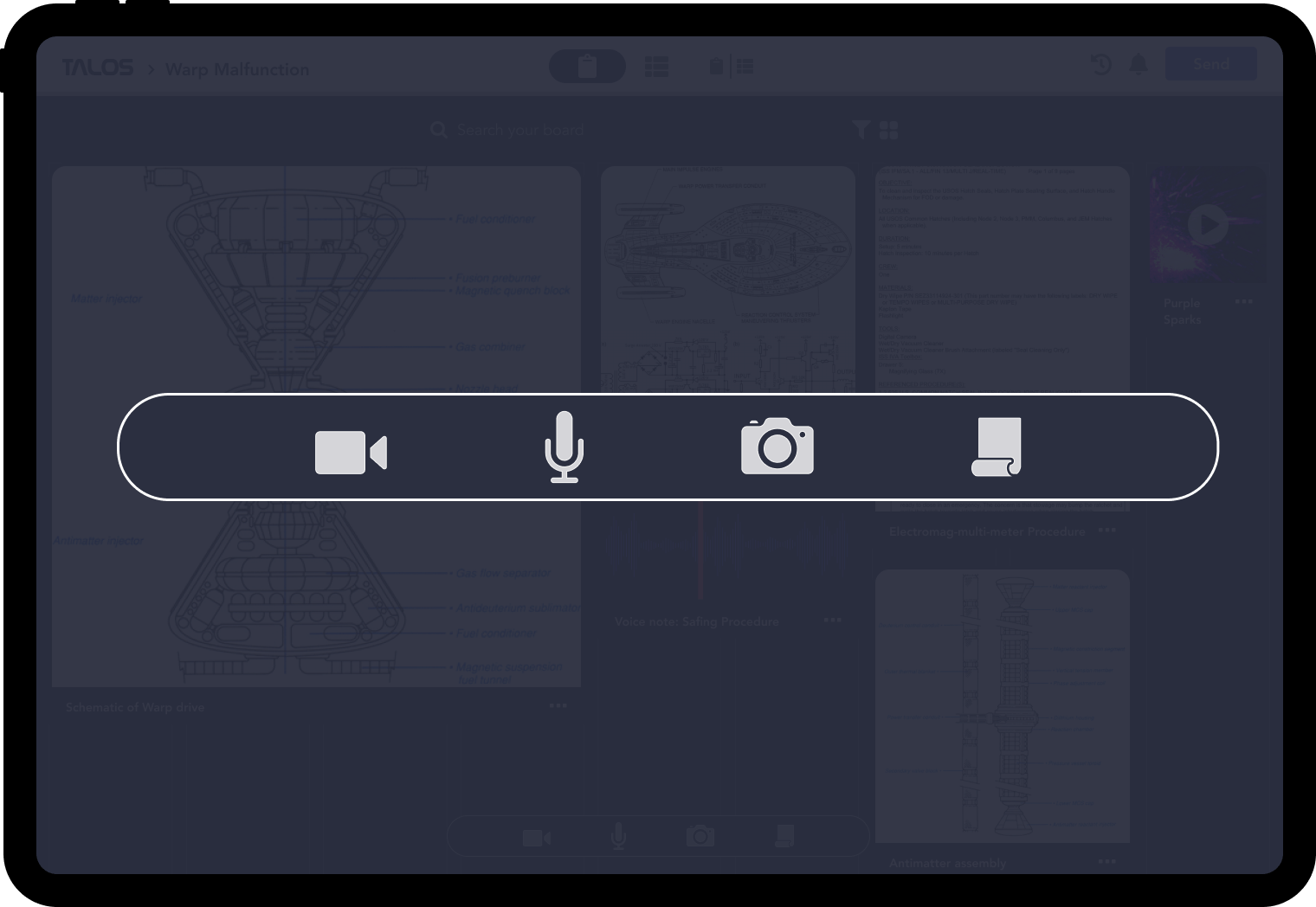 Using the bar at the bottom of the board, crew members can quickly capture audio, video, and photos on their iPad and add media to the board.

“Yeah, it seems to me that it makes the kind of stuff you’d want to do anyway easier to manipulate and move around, and that’s all really good.”
- Astronaut on STS-127 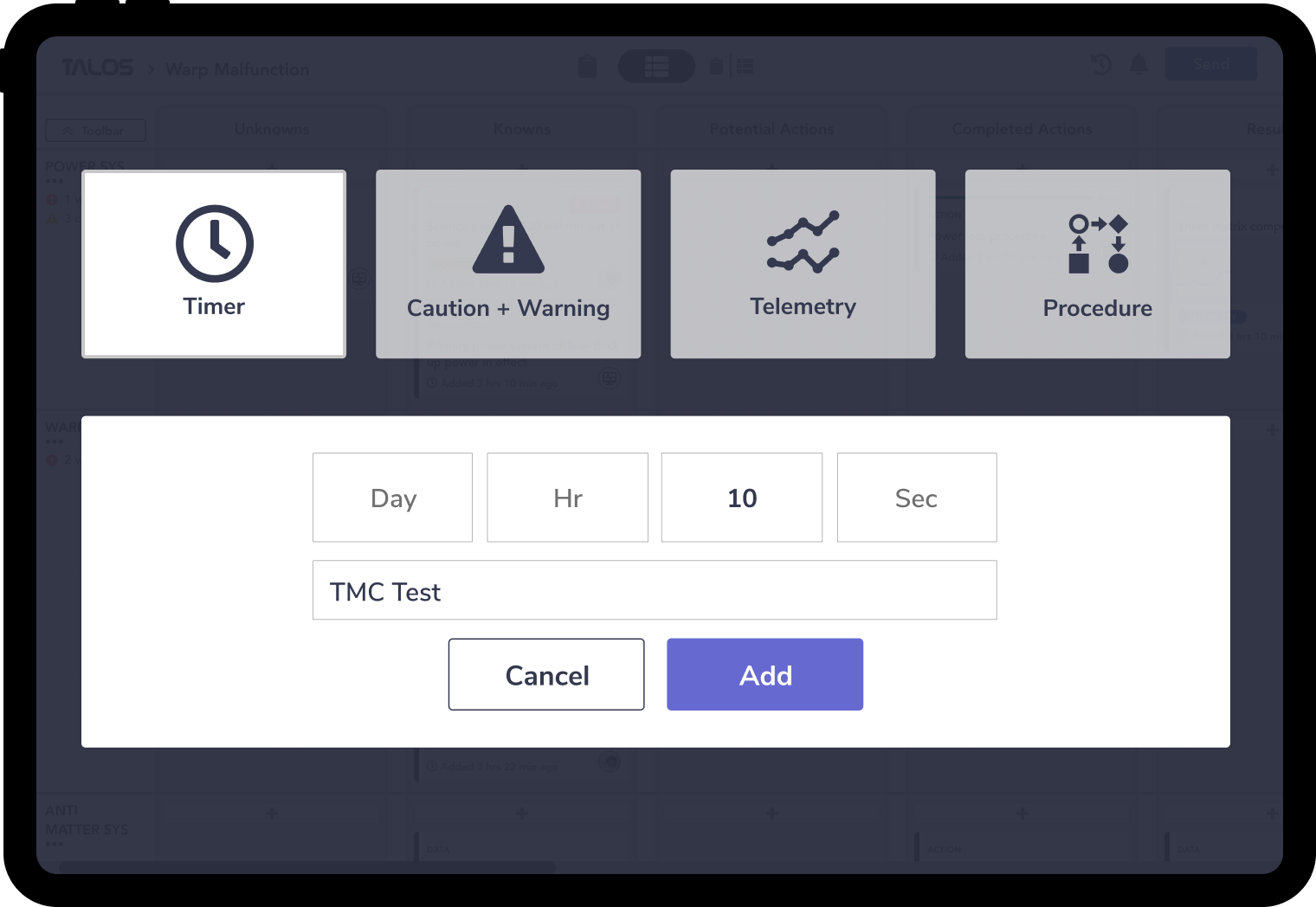 Crew members can set named timers which they can drag into specific cards. This associates them with a certain task.

“We have our timers, the little white egg timers... a timer goes off and we’re all looking at each other. What was that for?”
- Astronaut on STS-127

“That can be very diagnostic to a ground team. So video and audio as well as the voice to text I think would be extremely useful and time-saving useful for everybody.”
- Astronaut on STS-127 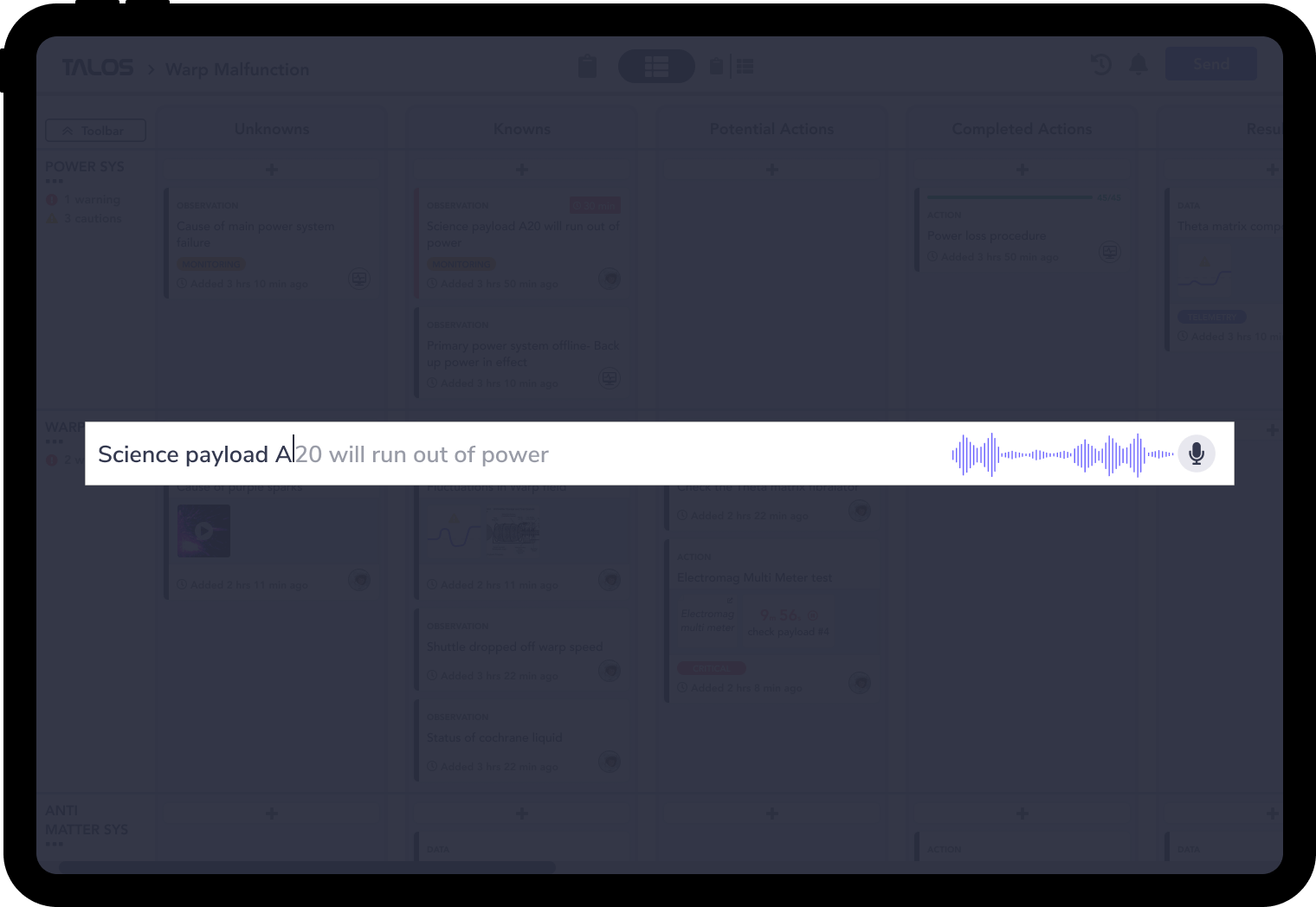 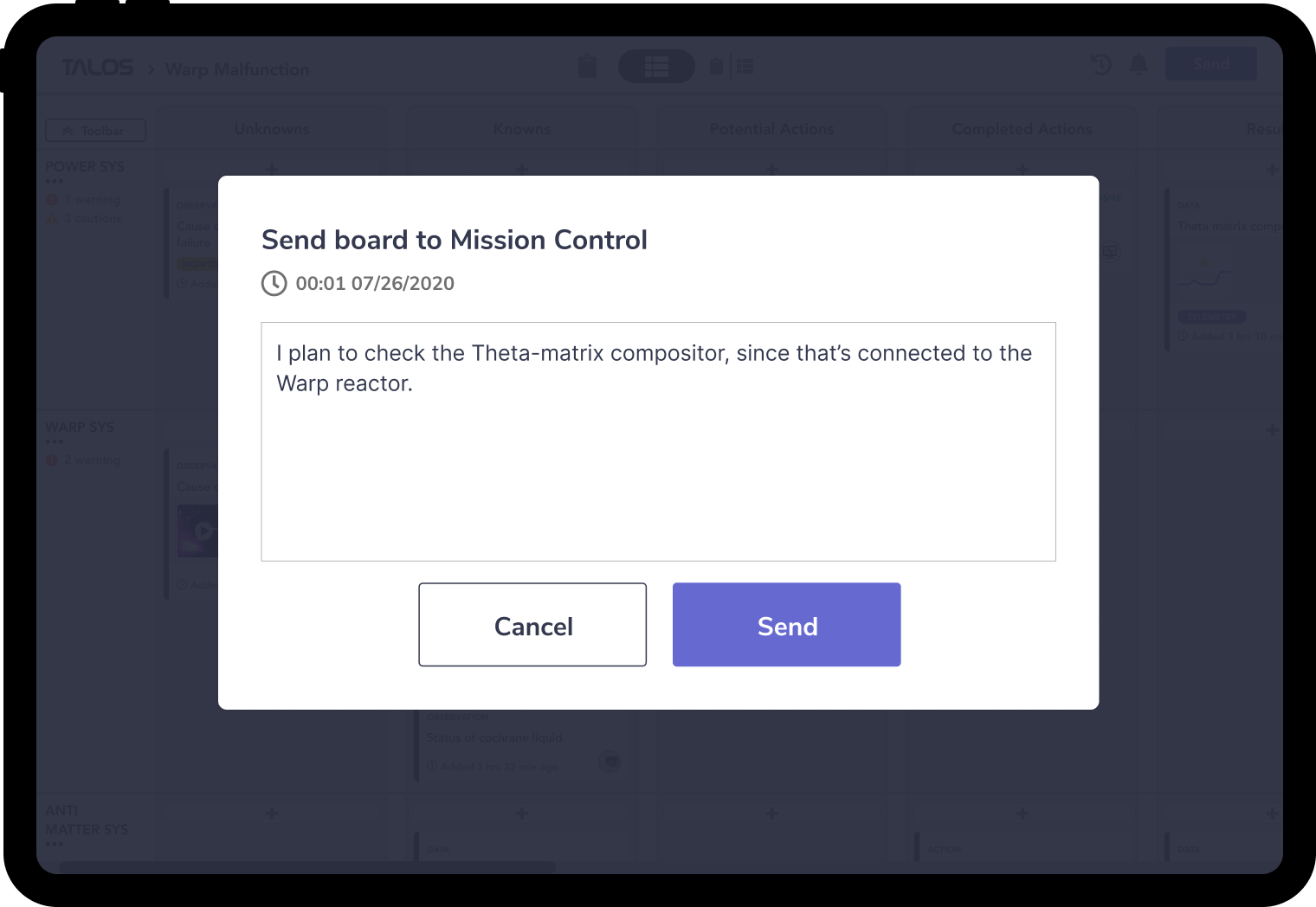 Send messages associated with a certain point in time using the “Send” button on the planning board. Receive messages from MCC in the form of cards.

“The thing I like the most is exactly that - the ability to click a button and now the ground is getting information!”
- Astronaut on STS-127

I was responsible for the interaction design (creating the entire prototype) and visual design of our UI interface.The colors were used purposefully to communicate how the plan and gather board function. Darker backgrounds for the gather board and lighter backgrounds for the plan board communicate difference between the two boards.
I created a design system on figma for our team to follow with reusable components. 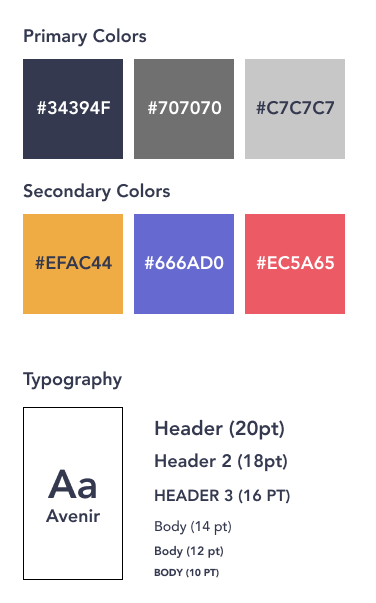 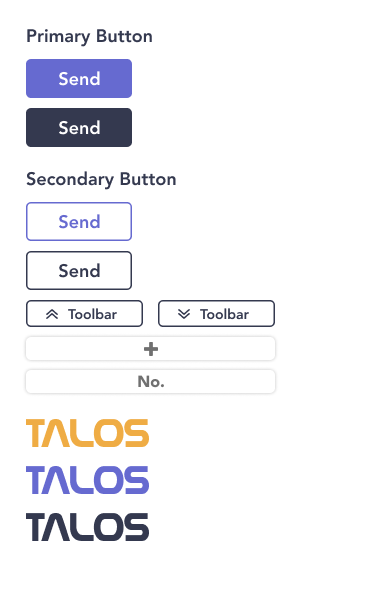 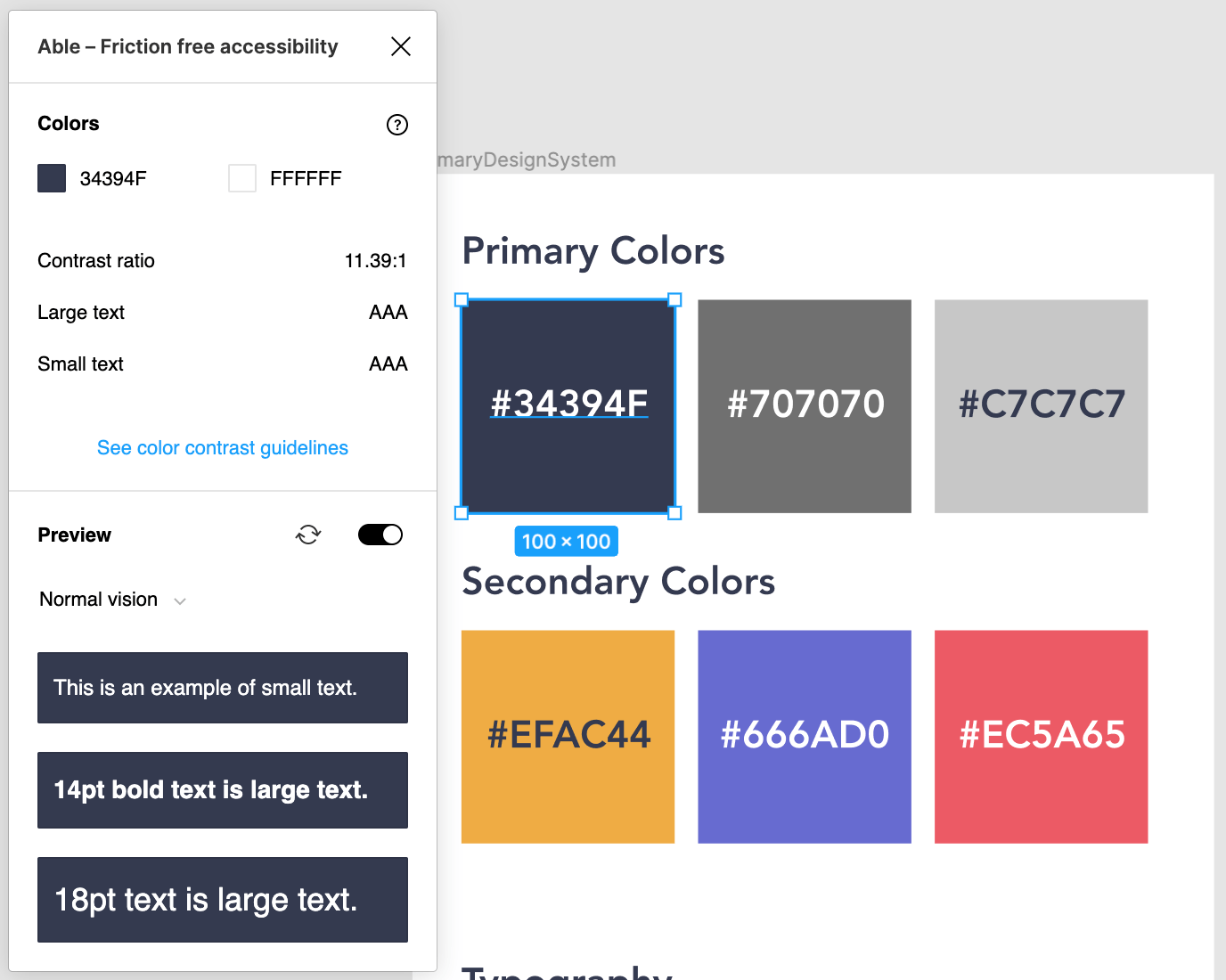 Being resourceful (interviews with astronauts):
The client had told us that no past team had managed to talk to an astronaut. However, I was very determined to talk to my end-user, so I reached out to multiple astronauts on LinkedIn and email. Persistence and luck led me to find 5 astronauts who participated in our project!

Dealing with differing opinions (astronauts vs MCC):
Astronauts and MCC often had differing opinions- Level of autonomy, features required, etc. Since our end user is the astronaut, I placed more weight on their opinion while keeping MCC's view in mind.

Responsible for Interaction and Visual design:
My key contribution was designing functionality, building the entire prototype (interaction design) and visual design for the project. I built a design system from scratch and created reusable components.

Link to our team blog: