Plug-in for Facebook that incentivizes exploration of articles with divergent viewpoints.

Four month project at Carnegie Mellon University (August 2019 - December 2019) | Collaboration with Angelina Thomas, Irene Yu, Jaclyn Saik, Jenni Lee and Maya Greenholt. I worked on the concept development, user workflow and final visual design. (All the visuals on this page are designed by me)

Numino is a Facebook plug-in aimed at helping people explore alternative and opposing views to counter echo chambers by using an engaging narrative. Users follow an alien as it learns and gathers information about the planet earth.

“It’s irresponsible for Facebook to give people such a powerful megaphone for personal expression, only to lock them inside an echo chamber.” - Tech Crunch

An echo chamber is a term describing a space within a closed system where particular beliefs are reinforced through repetition and communication. Exposure to echo chambers within social media platforms, specifically Facebook, perpetuate confirmation biases. This results in a polarized society.

“The problem isn’t that the diverse information isn’t there…but that we haven’t gotten people to engage with it in higher proportions.” - Mark Zuckerberg

Our goal is to create interventions to mitigate people’s confirmation biases and help them expand their perspectives.

We read almost 12 papers on persuasive techniques to help us understand what helps counter cognitive bias.

We incorporated the persuasive technique of distancing and obfuscating our goal by using an engaging narrative. Our plug-in is an immersive experience for the user, where they follow an alien as it learns and gathers information about the planet earth. On the way, the alien collects gadgets, grows and shares articles with friends.

We found several empirically tested methods to help people mitigate their biases. Educating people about the bias and showing the effects of the bias are methods to reduce cognitive bias. We incorporated words like “expand” and “explore alternative views” next to articles to prompt people to explore counter-attitudinal topics. We also added an introduction for the setup to educate people on the definition of confirmation bias.

Using concepts and research on embodied cognition, we designed our alien avatar to expand as you gain points from reading new articles and sharing articles with friends. Exposing people to an image of an expanding figure versus a static figure leads people to feel more self-actualized because a “growing” self ia a self-actualizing self. This is why every time the user achieves a milestone, the alien grows.

After testing with users, we debriefed by using an affinity diagram to gather insights and ideas for our next iteration.

The bias score sparked interest in our users. People said they would want to click on articles that have extreme bias scores - whether very biased or slightly biased.

Users were drawn to the social aspects of the plug-in. Progress in comparison to others added an incentive to keep using the plug-in. Interests of immediate circles were more impactful than random people online.

These initial prototypes materialized the alien form in tandem with persuasive techniques for helping our users understand their own bias. Some key success factors we wanted to monitor in our final high-fidelity prototype was the motivation to explore other worlds, and the user’s personal understanding of their own bias over time.

From the alien home page, users can see what people in different parts of the world are reading by clicking on the “explore articles in other worlds” function. This shows them popular articles in different regions of the world. For example, articles that are popular in Texas. They can also choose gadgets and attack other aliens.

The characters I designed allows users to customize the aliens shape, color, eyes and gadgets. Since our project is focused on consuming articles, we wanted the alien to invoke the idea of news and information. This is why the aliens eyes are a selection of numbers from 0 to 9.

Our plug-in, Numino, which comes from the word Numinous, means “A powerful feeling of both fear and fascination of being in awe and overwhelmed by what is before you.” The feeling of fear should not come from the overwhelming information we have today but rather a society that is polarized. 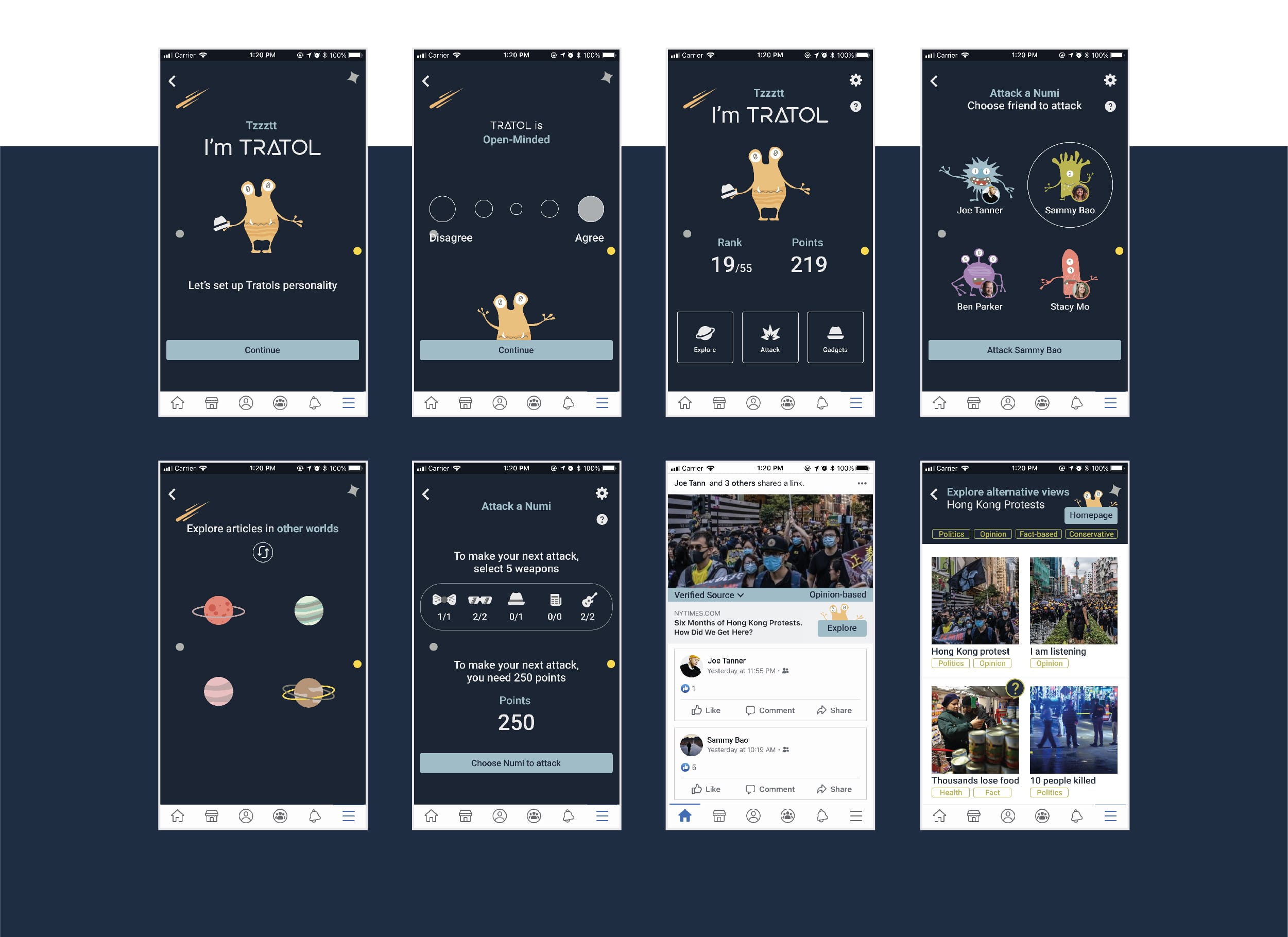